Druckhaus Waiblingen and Fujitsu have enjoyed a trusting and successful working relationship for
many years — a relationship that also includes system provider DIS Daten-IT-Service. The project
partners worked closely together to consolidate and modernize a heterogeneous IT landscape.
This enabled Druckhaus Waiblingen to significantly increase the performance, scalability, and
virtualization rate of its systems.

Thanks to Fujitsu, we have taken a giant leap forward in terms of virtualization and system performance. 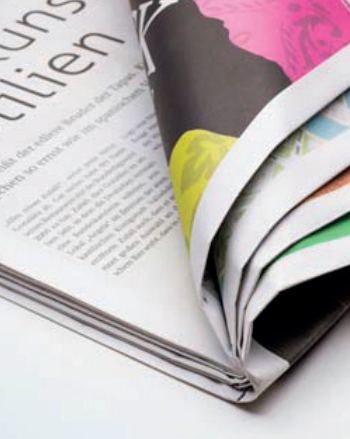 in savings achieved by Druckhaus Waiblingen in a 7-year comparison for the backup infrastructure alone.

Druckhaus Waiblingen was founded in 1839 and currently employs more than 140 printing experts. With clever innovations, modern machinery, and sustainable work, the family business stands for high-quality printed products. Every day, Druckhaus Waiblingen prints five daily newspapers and several weekly papers, but has also made a name for itself far beyond the Stuttgart area in the field of high-quality sheet-fed offset printing.

The IT department at Druckhaus Waiblingen Remstal-Bote GmbH is responsible for the entire IT landscape of two internal newspaper publishers as well as the printing house itself. To efficiently control and transparently map the complex processes, the company relies on a high-performance server and storage infrastructure. “We have very tight time frames of only a few hours available for our backup processes. For this, we require extremely fast, flexible, and highly virtualized systems,” explains Stefan Greiner, Head of IT Services at Druckhaus Waiblingen. As a basis for this, the company originally operated several server and storage solutions from different manufacturers. The goal was to consolidate and modernize this heterogeneous IT landscape into a uniform system
environment.

Long-standing collaboration based on trust

In this regard, the company relies on Fujitsu, an IT provider and solution partner with whom it has enjoyed a trusting and successful working relationship for many years. In 2018, for example, the IT managers at Druckhaus Waiblingen replaced the servers of a U.S. manufacturer with more powerful FUJITSU PRIMERGY RX2540 server systems. The servers were virtualized with VMware. The ERP system is operated in a separate dedicated VMware vSAN cluster. The other systems run on servers virtualized with VMware vSphere.

The data center was then restructured during ongoing operations and reduced to about one-third of its original size. In the first quarter of 2019, Stefan Greiner’s IT team then introduced a backup solution based on Veeam. A FUJITSU ETERNUS DX200 storage system with a capacity of 175 terabytes serves as a solid hardware infrastructure for this. After the data center had been expanded to three fire compartments, the FUJITSU ETERNUS AF250 all-flash storage solution comprising 38 terabytes was installed. CIFS data from three previous storage systems was migrated to this at the same time.

Throughout the entire consolidation project, system provider DIS Daten-IT-Service provided expert and professional consulting. As a result, Druckhaus Waiblingen was able to significantly increase the performance and scalability of its systems. In addition, it was possible to increase the rate of virtualized servers to 95 percent. “Thanks to Fujitsu, we have taken a giant leap forward in terms of virtualization and system performance. We were also able to successfully address one of our most important concerns, namely the speed of the data backup processes. As a result, backup times have been reduced from eight hours to two,” says Stefan Greiner. Very fast snapshots support the interlinked and complex processes in the two connected publishing houses.

In addition, Druckhaus Waiblingen now benefits from the maximum possible high availability: “If a server room were to fail completely, we would be able to fully restore all systems within a very short time,” confirms Stefan Greiner. And last but not least, the IT manager is pleased with the enormous savings in total cost of ownership: “By using Fujitsu systems, we were able to reduce the costs for the backup infrastructure alone by no less than 200,000 euros in a 7-year comparison.” ServiceNow applied at Mazda Logistics Europe: Resolution times are now 25% faster and 40% of incidents are resolved without manual agent intervention